Lake Khövsgöl is considered sacred by indigenous Mongolian people, and by a diverse band of travellers who seek the lake’s protection.

There are some wild places where we can be touched so profoundly that we glimpse for ourselves why our ancestors so deeply revered the forces of Nature. Mongolia is poetically known as the ‘Land of the Eternal Blue Sky’ by its indigenous inhabitants, and is one of the places where such a spiritual connection to nature has remained strong.

In order for the purity and immeasurable beauty of these wild places to be preserved for future generations, individuals across the world are rising in support of the local people who seek to protect them.

‘Mother Ocean’ is a lake in the heart of Mongolia, currently under threat from an Australian coal mining company. Lake Khövsgöl has been the most sacred place on Earth to indigenous people for countless generations. More than fifty artists, musicians, and activists from Nepal, Indonesia, Pakistan, Korea, Australia, New Zealand, and more join Mongolian activists in their struggle to protect the lake from no less than nine proposed coal mines.

Whether they succeed will be a testament to the impact of direct action and the influence that can be generated through social media. Jennifer Casidy connected with Wild Open, wishing to raise awareness around their campaign to achieve UNESCO World Heritage listing for Lake Khövsgöl. Casidy is currently in Mongolia as part of a travelling music festival, which is working towards this goal.

We need to do what we can to prevent the potential irreversible loss of the magic that exists in raw forms, in nature, and the cultures that have more gently and respectfully flourished alongside it.
– Jennifer Casidy, Liminal Caravan

A precious source of freshwater

Lake Khövsgöl is a rare source of freshwater in an arid landscape where most lakes are salty. It is the largest freshwater lake by volume in Mongolia, containing approximately 70% of the country’s fresh water, which gives reason for it being traditionally referred to as Mother Ocean with such reverence and respect.

This vast and deep body of water is located in the country’s remote northwest near the Russian border. It is one of the oldest lakes in the world and is surrounded by thick forests; home to elk, bears, wolves, deer, wild boar, and moose.

In 2015, an application for a UNESCO World Heritage Site listing of Lake Khövsgöl was denied due to lack of uniqueness, as the environment of the Khövsgöl region is considered by UNESCO to be too similar to Lake Baikal, which was declared a World Heritage Site in 1996. This ruling was a devastating blow for the local people attempting to preserve the lake.

International recognition of the lake’s importance

When Australian musician and environmental activist Craig Mason travelled to Mongolia in 2018 as part of an International Democracy Development Committee Program, he heard about the effort to protect ‘Mother Ocean’. Intrigued, Craig connected with Mongolians and a small women’s activist group, Friends of Khövsgöl (backed by the Mongolian Greens Party), who are in the process of re-applying for Lake Khövsgöl to be listed as a World Heritage Site in September 2019.

This time the application is being submitted on the basis of cultural significance, due to the unique values and lifestyles of indigenous people who live there.

With the help of Craig’s artist friends in Australia and beyond, the Mother Ocean Eco Arts Tour was formed:

While campaigning in Ulaanbaatar last year, I connected with a number of Mongolian activists and academics who are working toward [the] protection of sacred Lake Khövsgöl. [Raising] public awareness of the dangers facing the lake is the highest priority and a large group of local and international artists will generate a huge amount of interest, putting the protection of Lake Khövsgöl squarely into the [inter]national conversation.
– Craig Mason

New mines threaten to destroy the cultural and natural heritage of the Khövsgöl area and the cultural heritage tied to it. Multiple mining licenses have been approved for areas surrounding the lake, however, these are waiting on a railway to be built to transport mining ore to Russia and China.

An Australian mining company Aspire Mining, has an agreement with the Mongolian Government to open new mines around the lake when the railway line is completed. Mining displaces herders in an area where the traditional Reindeer people’s numbers are already dwindling, currently only 5% of their original numbers.

Craig’s passion for music and environmentalism merged when he began developing a tour program with a group of people who include: Mongolian activist Saruul Tovuusuren; the Mongolian Greens secretary; an environmental lawyer; and a number of Mongolian NGOs. The three week tour has just come to completion and brought together a total of 50 international artists, musicians and activists. They held a concert showcasing music from all over the world in Ulaanbaatar, and travelled in convoy to the Mother Ocean Lake, attracting attention with their costumery and creative performances along the way.

We live in a time where most of the environmental protection that needs to occur around the world is taking place where there are only small communities on site to do the protecting. For this reason it’s vital for us to act as a global community and find ways to offer international support to those on the ground. This tour is generating much-needed international attention for the UNESCO World Heritage application and is also raising money for the local people to continue their fight to protect ‘Mother Ocean’.

I do small things every day, in whatever way I can to minimise my impact. I appreciate and respect our earth and nature and I teach my children to do this. Sometimes, there are big things that speak to me and I feel called to offer my service. This project is one of them.
– Jennifer Casidy, Liminal Caravan

Every day more people are experiencing ecological grief and ecoanxiety as we wake up to the damage we are doing as a species. There are precious few places still in the pristine condition of Lake Khövsgöl. One of the most powerful ways to feel an immediate sense of empowerment is to do what this group of artists have done and take action to protect the places of natural beauty we still have left.

If you’d like to support the the Darkhad, Khotgoid, Uriankhai, Buriad, and the Tsaatan or Dukha people, in their fight to protect Mother Ocean you can still donate to The Mother Ocean Eco Arts Tour. All tour costs have been covered, which means 100% of every donation goes to supporting local indigenous people in their mission. 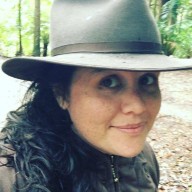 Thank you Even for bringing this incredibly important cause to the forefront with your excellent journalism!